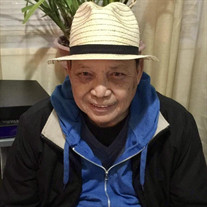 Aniceto Alcantara Maranan April 17,1946 - February 18,2021 Aniceto “ Tito” Alcantara Maranan A gentle soul, good father, devoutly to his family and a good friend. Resides at San Leandro, CA died unexpectedly on February 18,2021 at the age of 74. Tito, had a loving family both loving parents of Valentina and Angel and sisters Amelia, Virginia and Fe. He was the youngest of four children and the only boy of the Maranan family. In his school days , grade school at Jacinto Zamora elementary school , Pandacan, Manila Philippines and college years he was accepted at MLQ University in Manila, Philippines major in Banking & Finance. Tito is very humble, down to earth person helpful for assisting his family and friends to have a better future. His first job he worked at a gas station that his cousin owns while attending school at the same time. Then he worked at the Import/ Export trucking company and that’s the start meeting life long friends and his love of his life “ Luz” . During his free time as a kid he loves riding his bike , her sister Fe tells of a time that young Tito got lost. Adult years he loves flying kites, fishing, camping ,watching legal cockfights, watching western old movies a fan of Clint Eastwood , long driving, carpentry, planting/ gardening and loves to collect vintage toy cars. He enjoys walking around the neighborhood and spend time with grandkids getting donut holes and ice cream. Back at his home town Pillilia, Rizal he enjoys raising different kind of fish at his (pahang) fish pond. A life changing moment for Tito when he met his soulmate, true love and married “Luz” on October 26,1969 and raised five children Angelito ( deceased) , Gerald, Clarisa, Allan and Mark and they also raised Luz younger sister Imee and he won’t forget the time when he became grandfather to his children children’s. He cherished every moment with his wife ,his kids , grand kids and his Voltes 8 friends. A wonderful family experience when the family decided to migrate to United States of America , started living in New York, and settled in Northern,CA Stockton, Mtn. View and San Leandro. Tito worked at Unilab Corp. in the morning and swing shift at ADP Inc. His hard work paid off when he and his wife established there own family business a logistic trucking company in Juan Luna, Philippines and name there company Gala Clar Transport that was named after his kids names initials. Tito, had a strong religious faith follower of God. He attended and participated and became one of the member of Knights of Columbus at Holy Family Parish in Las Pinas, Philippines and continued at his local parish Assumption Church at San Leandro, CA. During lent at his hometown Pillilia,Rizal Philippines church of St. Mary Magdalene the Maranan clan has ritual tradition (pabasa) to honor our lord “ Mahal na Senor “ his a strong devotee and he always looking forward to be part of it and he made sure that he he can share that devotee to his family to live on. Aniceto lived a full happy life, he cherished his yesterday’s dreamt his tomorrow’s and lived his today.

The family of Aniceto A. Maranan created this Life Tributes page to make it easy to share your memories.

Send flowers to the Maranan family.