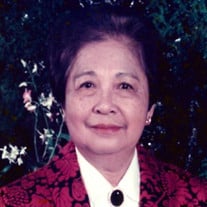 It is with profound sadness that we announce the passing of Alodeia Torres Baliao (“Luding” / “Ludi”) on Monday December 27, 2021. Alodeia quietly slipped away from these earthly bonds and gently entered into eternal rest. She was 95 years young. Alodeia was born on June 7, 1926 in Sison Pagasinan, Philippines to Gil Marmolejo Torres, Sr. and Ambrosia Gomez Casido Torres. She finished high school at Baguio City High School in Baguio City. She attended the Philippine University of Santo Tomas and majored in Bachelor of Science in Education. On September 27, 1952, Alodeia married Ruperto Marquez Baliao, a career diplomat who served as Philippine Consul in San Francisco from 1966 to 1971, and then Consul General in Los Angeles until his defection on May 18, 1973. They were married for 34 years. Born in the year of the Tiger, Alodeia embodied some of the animal’s qualities: a loving mother, fiercely protective of her children; smart, curious about things and a strong personality. She was an optimist and had a youthful outlook in life. She was a homemaker during her children’s formative years. But later worked for Blue Shield in the Claims Department, her first job in San Francisco. In Los Angeles she worked as a salesperson in Robinson’s, a high-end department store in Beverly Hills, and then at Presbyterian Hospital in the Patient Admissions Department. After her husband passed away she decided to retire. Alodeia had many interests….sewing, reading, dancing, singing, traveling, writing, and was always up on the news of the day. Her varied interests, curiosity and life experience made her a good conversationalist. Alodeia is survived by her children Victor Baliao and Bella Witt and son-in-law Stephen Witt, brother Gil Torres, Jr and sister Olympia Canio. She was preceded in death by her husband Ruperto, by her parents Gil (Sr) and Ambrosia Torres, and by her brothers, Jaime and Nicanor Torres. She will be forever loved and missed by her devoted family and friends.

It is with profound sadness that we announce the passing of Alodeia Torres Baliao (&#8220;Luding&#8221; / &#8220;Ludi&#8221;) on Monday December 27, 2021. Alodeia quietly slipped away from these earthly bonds and gently entered into eternal... View Obituary & Service Information

The family of Alodeia T. Baliao created this Life Tributes page to make it easy to share your memories.

It is with profound sadness that we announce the passing of Alodeia...

Send flowers to the Baliao family.