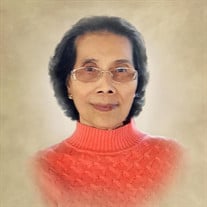 Surrounded by her family, Aida Bajet Giron died Friday, August 20, 2021. At the time of her death she was 87 years old. Aida was the youngest child of Joveno Bajet and Rosario Miranda, born on October 5,1933 in Banalo, Bacoor, Cavite, Philippines. In 1955 she married Pedro I. Giron Jr., together they had five children. In June of 1970, she and her family immigrated from the Philippines to the United States and settled in Alameda, CA. The family moved to Union City, CA in January 1973 where she lived for 37 years, she would eventually reside in Fremont, CA. In the Philippines, Aida worked as a school teacher. After teaching she worked for GSIS at Cubao until she immigrated with her family to America. She then worked for Cal Farm Insurance Company in Berkeley until the company relocated to Sacramento. Then in 1979 she began her career as an accountant with Philippine Airlines in San Francisco until her retirement in 1998. She was a long time member of the Parish of the Holy Infant Jesus in Fremont, CA and the Bacooreans of Northern California. Aida enjoyed spending time with her family and friends, occasionally going to the casino and spoiling her dog Pancho. She was an avid collector of Barbie dolls and elephants; she believed that elephants brought good luck when their trunk was up. Aida also loved to do word search puzzles, but her greatest pleasure was cooking for her family, especially unforgettable Sunday dinners at her house. She is preceded in death by her husband Pedro I. Giron Jr.( departed Jan. 1995). Survived by her brother, Plermo Bajet of Seattle, Washington, sister Rosita Alisasis of Cavite, Philippines. Her children; Cherrie (m. Eddie), Benjie (m. Pura), Jojo (m. Leslie), Amie, Eric (m. Betty) and her favorite Yorkshire Terrier, Pancho. Her thirteen grandchildren, Maurice (m. Chevy),Yoko (m. David), Aaron, Christian, Vanessa (m. Brian), Eric Jr.(m. Breanna), Julian (m. Nicole), Enrico, Ryan, Mark (m. Marissa), Kendall, Aiko and Jared. Her thirteen great grandchildren, Jeremiah, Isaiah, Maria, Ava, Rodrick, Nia, Liv, Caden, Emi, Jocelyn, Ace, Noah and Aida Mae (coming 2022). Aida also left behind many nieces, nephews, relatives and friends.

Surrounded by her family, Aida Bajet Giron died Friday, August 20, 2021. At the time of her death she was 87 years old. Aida was the youngest child of Joveno Bajet and Rosario Miranda, born on October 5,1933 in Banalo, Bacoor, Cavite, Philippines.... View Obituary & Service Information

The family of Aida Bajet Giron created this Life Tributes page to make it easy to share your memories.

Send flowers to the Giron family.